Eden Shadow is one of the youngest and freshest bands to appear in the art and progressive rock scene. Led by Welsh musician Ryan Elliott, the band sets out to make records that are both musically and conceptually grand in its scope, eclectic and outright ambitious and audacious. Eden Shadow also presents their music in a way that aims to capture all the magic of the ‘golden’ era of the album from bands in the 70’s such as King Crimson and Pink Floyd whilst also looking forward to the future and the opportunities that the modern musical age has to offer.

Eden Shadow released their debut album ‘Phases’ in January 2014 through White Knight Records whilst Elliott was studying at the academy of contemporary music. The album was a collection of material that Elliott had written from the age of 16 and was produced and released with the introduction of bandmates, Alex Broben on Bass and Tom Burgess on Drums; the album also featured a guest appearance from Hawkwind’s Nik Turner. ‘Phases’ was well received in the progressive community by reviewers and fans alike, and has sold copies in UK, USA, countries across Europe, Russia, Brazil and Japan.

In October 2016, Eden Shadow released their sophomore album, Melodies for Maladies an intense, ambitious and hard edged record that has widened the bands’ profile. The record featured a new line up with Aled Lloyd on drums as well as artwork from Colin Elgie, (the same artist who created Pink Floyd and Genesis covers) and a guest appearance from woodwind and saxophonist extraordinaire Theo Travis. The record has received critical acclaim amongst the progressive metal community. The album conceptual explores dark themes such as subterfuge, the media, politics of fear, war, anxiety, depression and loss. Despite a heavy exploration into the melancholy, there is always a sense of subtle optimism. 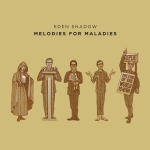 The next song to be released from my upcoming solo album is ‘Myopia’. Youtube link: https://www.youtube.com/watch?v=lECjmaud2bc&feature=youtu.be Spotify link: https://open.spotify.com/track/78lqmDULpgPJg5qIz0f6iW?si=BZ6ggUchSbS5fFOjs26dKw This is the darkest and heaviest track on the album. I wanted to write a song that captured the sense of disorientation I have experienced when following the news in the latter stages of the last decade. A lot of situations surrounding this may have occurred as a result of short sightedness and decision making based on the short term as opposed to the long term. All the while there is the ever present and existential threat of climate change and the warnings from experts of the short amount of time we have left to do something about it. Credits RME – Guitars, Vocals, Moog, Keyboards @eldavidson2 – Backing Vocals Ben Elliott – Bass Guitar @aled_drums – Drums Produced by RME and Andrew Bishop Recording and Mixing Engineer – @andrew_bish Mastering Engineer – @stevekitchmastering Artwork – @myhappylee_darlorurbz. #progressiverock #metal #myopia #kingcrimson #rmemusic #victoryamps #prsguitars
The first song we ever learnt to play as a band was YYZ. We will never stop playing it and every time we do play it, we pray that we do it justice! #Rush #neilpeart
Of all the musical legends to have passed away in recent years, this for me personally, is profoundly sad news. Neil Peart is a musical hero of mine, one of if not the best drummers of all time, an incredible lyricist and part of one of my favourite bands at all time. Rush was the first band me, Miff and Jiff talked about when forming KW and many other friendships have happened as a result of fan based communities. Not only was he an incredible musician, but a great writer, thinker and person, who showed a huge amount of resilience when suffering from unimaginable amounts of grief. My condolences to his family. I admire how humble and respectful he was around people and the humour he shared with the band. I was blessed to see Rush three times and will forever be inspired by Neil’s work. Thank you for everything. #Rush #neilpeart