Greetings folks, here is an update on everything that is going on with me musically. It has been rather quiet externally but very busy internally and things are about to arise so I thought it fruitful to inform thee!

First of all, earlier this week, I shot a video of three brand new tracks being performed Live with The Kinky Wizzards. The band originally comprised of Mathew ‘MIffy’ Griffiths and Jonathan ‘Jiffy’ Griffiths. Occasionally, you come across siblings with this innate blood relation to do extraordinary things together. The Staves comes to mind with their stupendous harmonies but when it comes to groove, these guys take it to another level, and despite knowing what they’ve done and being friends with them for years, they never fail to make my jaw drop (and my sides split with laughter for that matter). It is a real honour to be the guitarist in the instrumental trio and I look forward to you seeing the results. 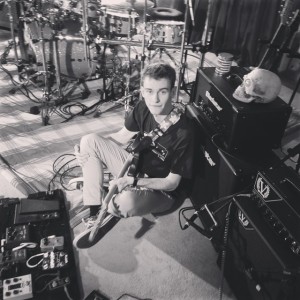 Secondly, after spending 6 months in solitude writing, I have finally finished the pre-production and arrangement of Eden Shadow album number 2. It is without a shadow of doubt one of the most ambitious things I have yet to undertake so I am not sure as to when it will be released quite yet, but as ever, I will keeping you updated with the production process.

Finally, I finished a series of jazz pieces for Lark Recordings and they are starting to appear on various playlists across the streaming world. It was a fun challenge and I’m proud to have a list of repertoire with Lark, which sits along a plethora of other artists. Be sure to visit their website http://larkrecordings.com/

Here is the list of the tracks that I recorded.

Days of Wine and Roses

Rehearsing through YYZ by @rush always fun to be had playing this track! #rush #yyz @charvelusa #charveldk24 #guitarist
Bonfire night! 🎆 Thanks to @miffy_bass for letting me get close to the action to record the sound for them! Looking forward to playing around with this in the studio! 😁 🎧 #composer #sounddesign #fieldrecordings #zoomaudio @nightlifefireworks
The Acer always looks beautiful this time of year! 🍂