Over the last couple of years, articles all over the news have documented the increased sales in Vinyl (according to Channel 4, sales are as high as they were in 1977).  The fact that the people responsible for this resurgence are within the age category of less than 30 years old certainly leaves me intrigued.

As a young and aspiring musician/writer/producer and general anorak, the increased popularity in vinyl pleases me greatly for a number of reasons. The higher quality of sound, the warmer mid-range, the tangibility of the experience of opening up the gatefold sleeve and your roundtable’s needle gracefully tracing audio across a shiny black polyvinyl chloride disc.

It all feels so ‘Real’ doesn’t it? Which is why I think younger people are more attracted to it than ever before. We are in a culture now, where having a PC, Laptop or other form of information technology as a consistent companion is the norm. Not to say that is a bad thing, but having had spent days reading news, messaging people, emailing people, blogging people, posting a picture of my cat in an absurd sleeping position…it all just makes me feel a little dizzy (I guess I’m only making things worst by writing this blog).

My point is, with so much information out there, our attention spans have supposedly spread seriously thin, especially with music. I have an Itunes Library of about 15 days length, a modest amount compared to some. Topped with Spotify and various other streaming services, Youtube, Soundcloud etc. it is very easy to either render oneself as disassociated or riddled with Jukebox syndrome.

As great a platform as the internet provides for the discovery and convenient consumption of music, very rarely does it go further than passive listening for me, probably because I’m too busy reading or engaging with something else, such as social network feeds or another news article of Jose Mourinho talking about “nurturing his young eggs.” It leaves me and a collective number of people my age searching for something more.

Which is where physical plays a part, and which is why despite what seems to be the general consensus, the way I listen to music predominantly is through either CD or Vinyl. I was brought up on my parent’s record collection of Queen, Rush and Genesis. Indeed, a weird child I was, but I hold that influence dear. There are no distractions. It’s me, the record, the sleeve and the record player, all of it demands that I am going to give my full attention to it. What equates is a blissful state of solitude.

But the beauty of Vinyl goes above and beyond just the experience and I actually think it’s only half of the reason younger people are given a reason to buy vinyl. ‘The journey is the reward’. Nothing attracts me more to a city centre than Coffee and Independent Record stores. The independent Record store, as an aesthetic in my opinion is just wonderful. I’ve spent days fuelling my caffeine addiction and going to record stores. I find it liberating to be in a space where everything isn’t uniform, and there are plenty of people my age who despise uniform. There are also some great moments of discovery that lie in a record store, such as serious 80’s hair metal (as can be shown in image 1), to finding an artist who will just prove to you that they are worth your time (as can be shown in image 2). It is a voyage of discovery, something again, which is great, but the Internet has neglected.

A gem I discovered in Spillers Records.

Record stores are also doing more to give themselves prevalence in cities and towns now. Record store day has led to the rise almost to the point that the annual celebrated 24 hours is almost overwhelming for some.  Additionally, the conjoining of record stores with independent café’s, I see as being a great move: Spillers Records and Plan Café in Cardiff being an example and Truck Store in Oxford being another. Furthermore, signing sessions almost definitely will pack out a store. I’ve been one of many fans, who have managed to meet Steven Wilson as a result, and I think the more artists, record stores and other small businesses can work together, the better. 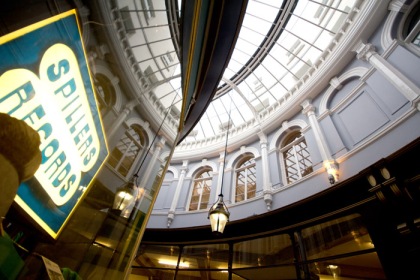 It really is an unusual and exciting time for music, and I certainly hope to see the rise of vinyl sales and number of people in Record Stores continuing. I for one, will certainly continue to play my part in that.

For further reading, I recommend Last Shop Standing, a documentary and book that gives insight into the history of the record store.

For further reading, I recommend Last Shop Standing, a documentary and book that gives insight into the history of the record store.